The stone bench marks the approximate location of Brister Freeman's house, one of many projects the Drinking Gourd Project is undertaking to raise awareness of Concord’s abolitionist and African American history

Brister Freeman was enslaved in Concord for the first thirty or so years of his life. After taking his freedom in the late 1770s, he purchased an acre of “old field” in Walden Woods. Other formerly enslaved people followed and Walden Woods became one of three black enclaves that sprung up in Concord following gradual emancipation in Massachusetts. Once emancipated, however, the former slaves were permitted to squat on only the most remote and infertile places. Walden Woods was one of them. Here, Freeman and his neighbors farmed, spun linen, made baskets, told fortunes, and otherwise tried to survive in spite of poverty and harassment.

Henry David Thoreau wrote about Freeman and other formerly enslaved inhabitants of Walden Woods in Walden (1854). Other than the chapter he devoted to them in Walden, the history of slavery in Concord has been forgotten.

In commemoration of his life, the Drinking Gourd Project placed a boulder marking the Freeman Family home site in the Fall of 2011.

For the full story of slavery and its aftermath in Concord, go to www.BlackWalden.com 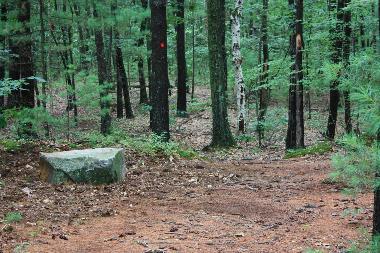 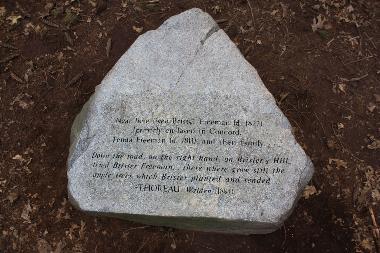